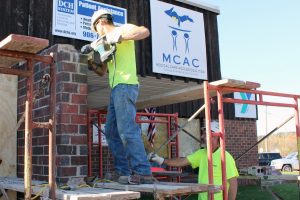 Gundlach-Champion father and son duo Hawkins (left) and Robert Lordson of Perkins remove old bricks from the east side of the Community Center building as part of a job that will see more than 2,000 bricks replaced.

IRON MOUNTAIN – Thanks to the generosity of some early Capital Campaign donors, the YMCA this month began work on some much-needed and long-overdue repairs to the outside of the building and inside the pool area.

“We have some immediate items of concern that we needed to address sooner than later,” Northern Lights YMCA Center Director Jonathan Ringel said. “We’ve been fortunate to receive some early lead gifts toward our upcoming Capital Campaign that will allow us to perform these repairs right away. We are so thankful for the support and excited to make these improvements to better serve our growing membership.”

Among the items on the task list is completion of the final phase of roof work as part of an earlier established contract with The Markell Company. Gundlach Champion is performing masonry work on the exterior of the building, replacing some 2,000 bricks. Neither job is expected to impact member use.

“It really will be a minor inconvenience, if any at all,” Ringel stated. “Most people won’t notice a thing.”

All three of the projects were approved the YMCA Board of Directors with a contingency cap and will be completed in a matter of weeks. The projects also fit within the scope of the master plans for the facility with regard to upcoming Capital improvements set to fully occur once the YMCA completes its Capital Campaign and takes official ownership of the Community Center building in late 2018.

The YMCA will officially kickoff its Capital Campaign in January 2018.

“We’re thrilled,” Ringel said. “These next few years will be so exciting as we work toward a vision for the future of this YMCA. We are very fortunate to have donors who share our vision. Whatever we do in the next few years is going to be solely donor driven. We will not reach beyond our means. We will deliver only want this community wants and supports.”

About Northern Lights YMCA
Since opening its doors to the community as a YMCA in 2010, the Northern Lights YMCA Dickinson Center has experienced tremendous growth in programming and membership. From an initial membership of around 100 people, the facility now boasts a growing membership base of more than 2,500 people, accounting for nearly 8,000 visits each month. More than 50 youth, aquatics, fitness and special event programming opportunities are available each session to members and non-members alike. The Y annually provides more than $100,000 in membership and programming assistance to the greater Dickinson County community.