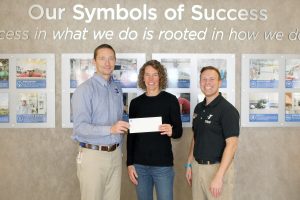 IRON MOUNTAIN – Systems Control, North America’s leader in the design and manufacture of solutions that enable the delivery of energy to the world, has committed $150,000 to the Northern Lights YMCA – Dickinson Center Capital Campaign.

“At Systems, we believe in community and looking toward the future,” CEO Dave Brule, Sr. said. “In a very short period of time, the Dickinson YMCA has become a remarkable success story in terms of what it offers and provides to this community. We’re proud to help build on that achievement so that the Y can continue to serve our area for many, many more years.”

Systems Control, founded here more than 50 years ago, is in a historic period of aggressive growth and expansion. One of Dickinson County’s leading employers, the company expects to add hundreds of new jobs in the next several years.

“The attitude and work ethic of our employees is second to none,” Brule Sr. said. “It’s a trait deeply rooted within the northwoods community and one of the main reasons for our success.

“Fellow business leaders understand the value of a thriving community center like the YMCA. A contribution to the future of the Dickinson YMCA is an investment in our community that will pay dividends for years to come in terms of talent recruitment, retention and development.”

Strengthening community is central to the YMCA’s mission. Since its inception in 2010, the Dickinson YMCA has contributed more than $800,000 in programming and membership assistance to the greater Dickinson County area.

“It’s the direct support of our community that allows us to fulfill our mission,” Dickinson Center Director Jonathan Ringel said. “We are extremely grateful to Systems Control for this donation and their support of our future.”

Systems Control, which also this year made a $50,000 donation to the Friends of City Park, is a strong community supporter and joins Boss Snowplow/The Toro Company and CCI Systems as major contributors to the YMCA Capital Campaign.

The phases and scope of the upcoming Capital Project and the amount the YMCA hopes to raise from the general public will be formally announced in January. Renovations would begin in 2019 after the YMCA officially purchases the Community Center Building from Dickinson County.

The extent of the YMCA’s remodeling plans are contingent on what the community will support and desire. The YMCA receives no public funding through taxes. And the organization will not take on debt to fund its Capital project.

“We’ve had a great start to this campaign,” Ringel said. “The community is responding in such a positive way. Momentum is building, and we’re very excited to launch our public campaign in January.”

For more information on the upcoming Capital Campaign, to pledge support, or to become a volunteer campaigner, please contact the YMCA at (906) 774-4076.

Since opening its doors to the community as a YMCA in 2010, the Northern Lights YMCA Dickinson Center has experienced tremendous growth in programming and membership. From an initial membership of around 100 people, the facility boasts a growing membership base of more than 2,500 people, accounting for nearly 8,000 visits each month. More than 50 youth, aquatics, fitness and special event programming opportunities are available each session to members and non-members alike. The Y annually provides more than $100,000 in membership and programming assistance to the greater Dickinson County community.

Systems Control, a division of Northern Star Industries, Inc., has over fifty years of expertise as an industry leader in the design and manufacture of engineered solutions that enable the reliable delivery of energy to the world. With a long standing history of operational excellence, Systems Control takes pride in delivering the highest quality service to its customers. The company has 600+ employees and is headquartered in Iron Mountain, MI, with engineering offices in Pewaukee, WI, and Houghton, MI. To learn more about Systems Control and employment opportunities, visit www.systemscontrol.com or contact Theresa Caylor at Theresa.Caylor@systemscontrol.com or 906-774-0440.